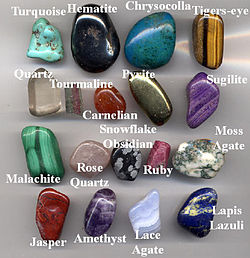 A gemstone or gem (also called a precious or semi-precious stone, a fine gem, or jewel) is a piece of mineral, which, in cut and polished form, is used to make jewelry or other adornments.However certain rocks (such as lapis lazuli), or organic materials that are not minerals (such as amber or jet), are also used for jewelry, and are therefore often considered to be gemstones as well. Most gemstones are hard, but some soft minerals are used in jewelry because of their luster or other physical properties that have aesthetic value. Rarity is another characteristic that lends value to a gemstone. Apart from jewelry, from earliest antiquity until the 19th century engraved gems and hardstone carvings such as cups were major luxury art forms; the carvings of Carl Fabergé were the last significant works in this tradition.

The traditional classification in the West, which goes back to the Ancient Greeks, begins with a distinction between precious and semi-precious stones; similar distinctions are made in other cultures. In modern usage the precious stones are diamond, ruby, sapphire and emerald, with all other gemstones being semi-precious. This distinction reflects the rarity of the respective stones in ancient times, as well as their quality: all aretranslucent with fine color in their purest forms, except for the colorless diamond, and very hard, with hardnesses of 8–10 on the Mohs scale. Other stones are classified by their color, translucency and hardness. The traditional distinction does not necessarily reflect modern values, for example, while garnets are relatively inexpensive, a green garnet called Tsavorite, can be far more valuable than a mid-quality emerald. Another unscientific term for semi-precious gemstones used in art history and archaeology is hardstone. Use of the terms ‘precious’ and ‘semi-precious’ in a commercial context is, arguably, misleading in that it deceptively implies certain stones are intrinsically more valuable than others, which is not the case.

In modern times gemstones are identified by gemologists, who describe gems and their characteristics using technical terminology specific to the field of gemology. The first characteristic a gemologist uses to identify a gemstone is its chemical composition. For example, diamonds are made of carbon (C) and rubies of aluminium oxide (Al2O3). Next, many gems are crystals which are classified by their crystal system such as cubic ortrigonal or monoclinic. Another term used is habit, the form the gem is usually found in. For example diamonds, which have a cubic crystal system, are often found as octahedrons.

Gemstones are classified into different groups, species, and varieties. For example, ruby is the red variety of the species corundum, while any other color of corundum is considered sapphire. Another example are the Emerald (green), aquamarine (blue), red beryl (red), goshenite(colorless), heliodor (yellow), and morganite (pink), which are all varieties of the mineral species beryl.

Gems are characterized in terms of refractive index, dispersion, specific gravity, hardness, cleavage, fracture, and luster. They may exhibitpleochroism or double refraction. They may have luminescence and a distinctive absorption spectrum.

Material or flaws within a stone may be present as inclusions.

Gemstones may also be classified in terms of their “water”. This is a recognized grading of the gem’s luster and/or transparency and/or “brilliance”. Very transparent gems are considered “first water”, while “second” or “third water” gems are those of a lesser transparency. 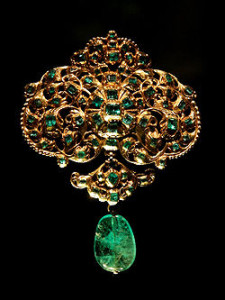 A mnemonic device, the “four Cs” (color, cut, clarity and carats), has been introduced to help the consumer understand the factors used to grade a diamond. With modification, these categories can be useful in understanding the grading of all gemstones. The four criteria carry different weight depending upon whether they are applied to colored gemstones or to colorless diamond. In diamonds, cut is the primary determinant of value, followed by clarity and color. Diamonds are meant to sparkle, to break down light into its constituent rainbow colors (dispersion), chop it up into bright little pieces (scintillation), and deliver it to the eye (brilliance). In its rough crystalline form, a diamond will do none of these things; it requires proper fashioning and this is called “cut”. In gemstones that have color, including colored diamonds, it is the purity and beauty of that color that is the primary determinant of quality.

Physical characteristics that make a colored stone valuable are color, clarity to a lesser extent (emeralds will always have a number of inclusions), cut, unusual optical phenomena within the stone such as color zoning (the uneven distribution of coloring within a gem) and asteria (star effects). The Greeks, for example, greatly valued asteria in gemstones, which were regarded as a powerful love charm, and Helen of Troy was known to have worn star-corundum.

Aside from the diamond, the ruby, sapphire, emerald, pearl (not, strictly speaking, a gemstone) and opal have also been considered to be precious. Up to the discoveries of bulk amethyst in Brazil in the 19th century, amethyst was considered a precious stone as well, going back to ancient Greece. Even in the last century certain stones such as aquamarine, peridot and cat’s eye (cymophane) have been popular and hence been regarded as precious.

Nowadays such a distinction is no longer made by the gemstone trade. Many gemstones are used in even the most expensive jewelry, depending on the brand name of the designer, fashion trends, market supply, treatments, etc. Nevertheless, diamonds, rubies, sapphires and emeralds still have a reputation that exceeds those of other gemstones.[citation needed]

Rare or unusual gemstones, generally meant to include those gemstones which occur so infrequently in gem quality that they are scarcely known except to connoisseurs, include andalusite, axinite, cassiterite, clinohumite and red beryl.

Gem prices can fluctuate heavily (such as those of tanzanite over the years) or can be quite stable (such as those of diamonds). In general per carat prices of larger stones are higher than those of smaller stones, but popularity of certain sizes of stone can affect prices. Typically prices can range from US$1/carat for a normal amethyst to US$20,000–50,000 for a collector’s three carat pigeon-blood almost “perfect” ruby.

A few gemstones are used as gems in the crystal or other form in which they are found. Most however, are cut and polished for usage as jewelry. The picture to the right is of a rural, commercial cutting operation in Thailand. This small factory cuts thousands of carats of sapphire annually. The two main classifications are stones cut as smooth, dome shaped stones called cabochons, and stones which are cut with a faceting machine by polishing small flat windows called facets at regular intervals at exact angles.

Stones which are opaque such as opal, turquoise, variscite, etc. are commonly cut as cabochons. These gems are designed to show the stone’s color or surface properties as in opal and star sapphires. Grinding wheels and polishing agents are used to grind, shape and polish the smooth dome shape of the stones.

Gems which are transparent are normally faceted, a method which shows the optical properties of the stone’s interior to its best advantage by maximizing reflected light which is perceived by the viewer as sparkle. There are many commonly used shapes for faceted stones. The facets must be cut at the proper angles, which varies depending on the optical properties of the gem. If the angles are too steep or too shallow, the light will pass through and not be reflected back toward the viewer. The faceting machine is used to hold the stone onto a flat lap for cutting and polishing the flat facets. Rarely, some cutters use special curved laps to cut and polish curved facets.

The color of any material is due to the nature of light itself. Daylight, often called white light, is actually all of the colors of the spectrum combined. When light strikes a material, most of the light is absorbed while a smaller amount of a particular frequency or wavelength is reflected. The part that is reflected reaches the eye as the perceived color. A ruby appears red because it absorbs all the other colors of white light (green and blue), while reflecting the red.

This difference in color is based on the atomic structure of the stone. Although the different stones formally have the same chemical composition, they are not exactly the same. Every now and then an atom is replaced by a completely different atom (and this could be as few as one in a million atoms). These so-called impurities are sufficient to absorb certain colors and leave the other colors unaffected.

For example, beryl, which is colorless in its pure mineral form, becomes emerald with chromium impurities. If manganese is added instead of chromium, beryl becomes pink morganite. With iron, it becomes aquamarine.

Some gemstone treatments make use of the fact that these impurities can be “manipulated”, thus changing the color of the gem.

Gemstones are often treated to enhance the color or clarity of the stone. Depending on the type and extent of treatment, they can affect the value of the stone. Some treatments are used widely because the resulting gem is stable, while others are not accepted most commonly because the gem color is unstable and may revert to the original tone.

Heat can improve gemstone color or clarity. The heating process has been well known to gem miners and cutters for centuries, and in many stone types heating is a common practice. Mostcitrine is made by heating amethyst, and partial heating with a strong gradient results in ametrine—a stone partly amethyst and partly citrine. Much aquamarine is heated to remove yellow tones and change the green color into the more desirable blue or enhance its existing blue color to a purer blue.

Nearly all tanzanite is heated at low temperatures to remove brown undertones and give a more desirable blue/purple color. A considerable portion of all sapphire and ruby is treated with a variety of heat treatments to improve both color and clarity.

When jewelry containing diamonds is heated (for repairs) the diamond should be protected with boracic acid; otherwise the diamond (which is pure carbon) could be burned on the surface or even burned completely up. When jewelry containing sapphires or rubies is heated, it should not be coated with boracic acid or any other substance, as this can etch the surface; they do not have to be “protected” like a diamond.

Virtually all blue topaz, both the lighter and the darker blue shades such as “London” blue, has been irradiated to change the color from white to blue. Most greened quartz (Oro Verde) is also irradiated to achieve the yellow-green color.

Emeralds containing natural fissures are sometimes filled with wax or oil to disguise them. This wax or oil is also colored to make the emerald appear of better color as well as clarity. Turquoise is also commonly treated in a similar manner.

Fracture filling has been in use with different gemstones such as diamonds, emeralds and sapphires. In 2006 “glass filled rubies” received publicity. Rubies over 10 carat (2 g) with large fractures were filled with lead glass, thus dramatically improving the appearance (of larger rubies in particular). Such treatments are fairly easy to detect.