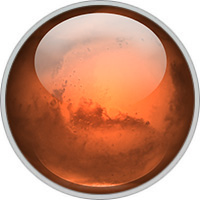 Aries is ruled by Mars, the God of War. Mars is the planet of motion, desire, and energy in astrology. It is man’s “leftover” animal nature, which can be thought of as his survival instinct.

Our animal instincts for violence, rage, and survival are regulated by Mars. Mars is in charge of our sexual impulses. Whereas Venus is the planet of romantic attraction, Mars is the planet of simple physical attraction. This is a world that prefers action over reaction. There is no reflection until operation with Mars. The drive associated with Mars differs from that of the Sun in that it is self-assertion rather than assertion of the will; it is raw energy rather than creative energy.

Mars is the push that gets us out of bed in the morning, our drive and desire nature, and our active energy. When we are “acting out” our Mars, we are assertive, directed, forthright, and adventurous. On the negative side, we can be impulsive, rash, impatient, aggressive, and forceful.

Mars is the action planet of the zodiac. The “Red Planet”, after all, should be pretty fiery, and Mars does not disappoint. Energy, passion, drive and determination are all right up Mars’s alley. This planet commands you (and yes, Mars does rule the military) to stand up, be noticed and get things done – sitting on the sidelines belongs somewhere else in the heavens. Simply put, Mars speaks to the power and confident expression of the individual.

Ambition and competition are also within Mars’s realm. Whether it’s at work or on the field of play, Mars encourages us to face challenges and to be our best – or better. Aggression is part of the plan here, although Mars also values courage and honor. Assertion and a daring, fearless nature please this planet.

It’s important to note that Mars’s energy can be constructive or destructive. The God of War in ancient times, Mars could be brutally violent. While this energy still emanates from the planet, it also asks us to harness this force for good. Stamina, ambition and achievement are all part of Mars’ mantra.

Mars rules our sexuality and sexual energy, and governs weapons, accidents and surgery (the last two illustrating the yin and yang nature of this planet). In the end, however, the energy of Mars can be quite useful if used properly.

It takes nearly two years for Mars to complete its orbit through the zodiac. It is masculine energy and rules both Aries and Scorpio, and the First and Eighth Houses.