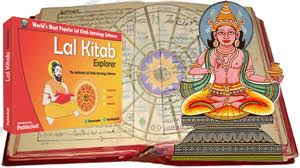 Lal Kitab (Hindi: लाल किताब, Urdu: لالکتاب, literally Red Book) is a set of five Urdu language books on Hindu astrology and palmistry, written in the 19th century, based on the Samudrika Shastra.

Poetic verses with philosophy and hidden nuances form the core farmanns or upaya (remedy recommended) of the book. It is believed to have Persian origins and has led to field of remedial astrology known as Lal Kitab remedies, that is simple remedies for various planetary afflictions in the horoscope or birth chart, which have over the years become part of the folk traditions of the region, that includes North India and Pakistan.

Although, the author of the original verses is unknown or a matter of debate, however, Pandit Rup Chand Joshi (1898–1982), resident of Village Pharwala, Nurmahal tehsil in Jalandhar district of Punjab, who authored the presently available version during the years 1939 to 1952 in five volumes, is regarded as the master of this science. Some regard him also as originator of this books or this branch of vedic astrological science while others believe original writer preferred to remain anonymous and Pandit Rup Chand Joshi re-wrote his work. The anonymous person by some is considered to be mystic Guru of the author mentioned in his memoirs.

According to some believers Ravana is considered to be the original author of Lal Kitab. They say that when Ravana lost power due to arrogance, he also lost possession of Lal Kitab which later surfaced in a place called Aaad in Arabia, where it got translated into Urdu and Persian. Some people believe it to be a part of Arabian and Islamic culture and believe it to be having Persian origins, many call it The Red Book of Persia but most of acclaimed followers and researchers attribute it to be a book on branch of jyotisha, as the book follows the planetary positions and names of Navagraha used by vedic people to give predictions and remedies.

The book was written by Pandit Roop lal ji on the basis of some intuition or some inner strength as he use to study too hard. some time he use to say that i keep on writing what ever i feel from in side and next day i edit or rearrange the word which i have written.

The names of the five set of books authored by Pt. Rup Chand Joshi, together called as Lal Kitab with their years of publication, are as follows. A copy of first book published in 1939 is preserved in Lahore Museum. :-

Lal Kitab is unique in field of vedic astrology because for the first time a book explained how certain planetary positions in one’s horoscope should also reflect in the lines of his palm. In other word the book is on astro-palmistry, that is, it has mixed the two different arts of Palmistry and Jyotisha a.k.a. Hindu astrology together.

The books were published in red hard-cover. In Hindi and Urdu languages Lal means the color red and Kitab means a book. Further, in India traditionally, business ledger books are bound in red color. Also red color in Hindu religion is considered to be very auspicious and as symbol of Ganesha and Lakshmi. The red kum-kum is essential in all auspicious occasion and Hindu religious rites. The Lal Kitab volumes were also given a red binding because these books contain duniyavi hisaab kitaab ( the ledger book of one’s life). In fact, Lal Kitab mandates in very clear terms, that any book dealing with this system must be bound in non-shining, red color.

For the first time in the history of astrology, Lal Kitab introduced a new style of horoscope analysis with quick and affordable remedies, which were devoid of remedies like pooja and wearing ofgemstones, generally recommended by other branches of Vedic astrology and Jyotisha.

The book has been popular in both Indian and Pakistan, many of its astrological remedies upaya or farmans have become part of every day culture in the subcontinent, like throwing coins into a river while passing over it, feeding grass to cow, bread to a dog and offering meals to unmarried girls etc. Some of its farmans have become proverbs, in languages as diverse as Multani language.